Kaniehtiio Horn (born c. 1986) is a Mohawk actress. She was nominated for a Gemini Award for her role in the television film Moccasin Flats: Redemption. She appeared in the films The Trotsky, Leslie, My Name is Evil and The Wild Hunt, and starred in the CBC television sitcom 18 to Life. She joined the cast of the Netflix drama Hemlock Grove.

Born in Notre-Dame-de-Grâce, Montreal, Quebec, Canada, Horn is a native of Kahnawake, a Mohawk reserve outside of Montreal. Her mother, Kahn-Tineta Horn, is a former model and a political activist for the Kahnawake First Nation. Her fa Read his whole biography ather, who is Scottish/German, is a lawyer. Growing up, Horn split her time between the reserve and Ottawa, where her father lived. Horn has six older sisters. Her sister, Waneek Horn-Miller, was co-captain of the Canadian women's water polo team at the 2000 Sydney Olympics.

Horn decided to be an actor at a young age, but concentrated on swimming and water polo as a teenager. She graduated from Dawson College in 2005 for theatre arts, and appeared in a number of short films.

Horn's first film acting credit was in 2006 for the CBC television mini-series Indian Summer: The Oka Crisis. Horn was present at the 1990 Oka Crisis at the age of four with her mother and 14-year-old sister. Her sister, Waneek, was stabbed in the chest by a soldier's bayonet while holding Horn; a photograph of the incident, published on the front page of newspapers, symbolized the standoff between Mohawks and the Canadian government.

Horn landed a role in the 2007 drama film The Colony, directed by Jeff Barnaby. In 2008, she appeared in the TV film Moccasin Flats: Redemption, and was nominated for a Gemini Award for her role. She also appeared in Journey to the Center of the Earth that year, starring Brendan Fraser.

In 2009, Horn starred in The Trotsky, directed by Jacob Tierney, playing a Montreal high school student. She appeared in The Wild Hunt, directed by Alexandre Franchi and in Reginald Harkema's Leslie, My Name Is Evil, as a member of Charles Manson's death cult.[5] The three Canadian films were selected for the prestigious Festival du Nouveau Cinéma. The Trotsky and The Wild Hunt made the Top 10 Canadian films list at the 2009 Toronto International Film Festival.

Horn starred in the CBC television sitcom 18 to Life as Monica Bellow. The series was picked up by the CW network and aired in the U.S., beginning in August 2010. Horn was filming a second season in Montreal in mid 2010.

Horn voiced several roles in By the Rapids, an APTN cartoon she made in collaboration with friend Joseph Tekaroniake Lazare. She also shot an APTN television pilot, Escape Hatch, with Mohawk writer-director Tracey Deer. In 2010, Horn again worked with director Jacob Tierney in the film Notre Dame de Grâce.
She starred in the low-budget slasher film A Flesh Offering, directed by Jeremy Torrie, playing an artist that gets lost in the woods.

In 2011, Horn starred in the horror anthology film, The Theatre Bizarre, and played a priestess in Immortals. She will appear in the film, Penthouse North, with Michelle Monaghan and Michael Keaton, and shot a CBC comedy pilot. In 2012, Horn joined the cast of the Netflix drama Hemlock Grove as Destina Rumaneck, a Gypsy witch-prostitute. She will star alongside Famke Janssen, Dougray Scott, Bill Skarsgard, Landon Liboiron and Lili Taylor in the original horror series.

Horn also provided her voice for the 2012 video game, Assassin's Creed III, developed by Ubisoft. She voices the half-Native American, half-English protagonist's Mohawk mother, Kaniehtíio with whom she shares the same name 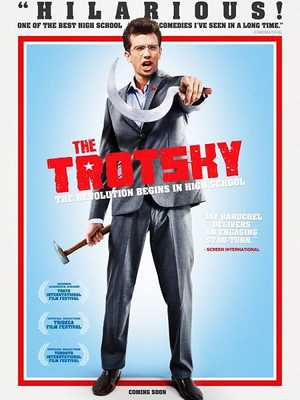 Comedy Directed by: Jacob TierneyWith: Jay Baruchel, Emily Hampshire, Michael Murphy,...Leon Bronstein is not your average Montreal West high school student. For one thing, none of his peers can claim to be the reincarnation of early 20th century Soviet iconoclast and Red Army hero, Leon Trotsky. When his father sends Leon to public school as punishment for starting a hunger strike at... Read more...